The Legendary History of the Omega Speedmaster

The Omega Speedmaster represents both timeless design and a legendary history, one deeply entwined with the age of space exploration. The Speedmaster can boast that it was the first watch worn on the surface of the moon, and rumour has it that it will be the first watch worn to Mars once a manned mission can safely be launched. Beloved by amateur collectors and serious connoisseurs alike, the Speedmaster—affectionately referred to as a ‘Speedy’—remains as sought-after now as when it was first introduced. A Speedmaster is not automatic, but must be wound. Consider that an automatic watch relies on the movement of weights, which would render it useless in a low- to zero-gravity environment. Burton Berinsky, writing for GQ, explains that an Omega Speedmaster is defined by its pure simplicity: “every detail is functional, and it functions very well.”

Omega was known for its pilot watches, having supplied the British Flying Corps (known later as the Royal Air Force) beginning in 1917. Other armed forces chose Omega as well, including the British armed forces during WWII. A traditional pocket watch would have been easily lost, damaged or useless in demanding conditions, which is why a timepiece strapped to the wrist became widely used throughout the military. The 27 CHRO C12 calibre was introduced in 1942, and would pave the way for the Speedmaster. This calibre is a superb example of its kind, and has been used a base movement not only by Omega but by Breguet, Patek Philippe and Vacheron Constantin.

The Speedmaster was born in 1957 when it was introduced as a racing and sports chronograph—a watch with “stopwatch” functionality— that could be read easily. Swiss designer Claude Baillod created the first model, known as CK 2915 or the “Broad Arrow,” to be both robust and especially legible. The watch had an anti-shock, anti-magnetic movement with a triple-sealed steel case designed to be water resistant to 60 metres (200 feet). Baillod placed the tachymetric scale (which allows a user to measure speed based on time travelled over a fixed distance, allowing a conversion from time into speed) on the bezel (the outer rim of the watch) rather than on the dial, and used high-contrast hour and minute hands.

At the time, chronographs represented a very small part of the market. Chronographs were seen as a tool aimed towards professionals rather than the casual wearer. Omega’s first marketing campaign for the Speedmaster targeted “men who reckon time in seconds,” who they identified “scientists, engineers, T.V. and movie directors, athletes and their coaches.”Omega had released three technical watches within the space of a few years: its Seamaster in 1953, a diver’s watch intended to compete with similar models released by Blancpain and Rolex, the Railmaster in 1957, another watch geared towards professionals in the transportation industry, and the Speedmaster.  All three are still in production, though it is the Speedmaster which is the most coveted of the suite.

Cementing the Speedmaster’s legacy was its role in the space race. The first Omega watch worn outside of Earth’s atmosphere belonged to astronaut Walter Schirra, only the fifth American to go to space. In 1962, Schirra wore his own personal Speedmaster, as NASA had not yet issued a flight-qualified watch in the standard astronaut kit. The watch performed faultlessly, and has been worn on every subsequent mission.

The same year, 1962, NASA began officially testing watches that could withstand the rigors of space travel. An apocryphal story suggests that that two NASA officials were sent to a Houston jewellery store to select a few to experiment on. Five watches were bought and tested, with the Speedmaster beating its competitors—often rumoured to be Breitling, Rolex and Longines. Another story suggests that a tender was sent to several watch manufacturers, only a few of which responded.

NASA watch testing officially began in 1965 and were subjected to a battery of tests. Watches were subjected to eleven exams, which they each had to endure eleven times. They included high and low temperatures ranging from 93°C to -18°C, the same high and low temperatures but in a pressure chamber, humidity of at least 95%, a pure oxygen environment without deterioration, shock testing in six different directions, rapid acceleration, decompression inside a high temperature vacuum, intense vibration and acoustic noise at a high frequency. The Speedmaster gained 21 minutes during the decompression test, lost 15 minutes during the acceleration test, and the luminescent paint on its dial vaporized after the battery of tests—though it operated satisfactorily and was the only watch to survive. To read more about the ‘torture tests’ and how Rolex and Longines watches fared in the lab, please click here.

NASA kept their endorsement of the Speedmaster classified. The Omega company only found out about their product’s out-of-this-world success when they saw a press photo of astronaut Edward White out on a spacewalk in 1965. Omega decided to add the word “professional” to the model, making it the Omega Speedmaster Professional.

The Speedmaster is often referred to as The Moonwatch, it being the timepiece worn during the Apollo 11 landing. Yet while two men walked on the moon, only one Speedmaster from that voyage touched down. Neil Armstrong was not wearing his watch on that historic moonwalk, having left it in the shuttle with Michael Collins to serve as a backup to a failing piece of equipment. It was Edwin “Buzz” Aldrin who took the Speedmaster to the moon, strapped over his spacesuit’s wrist using a wide band of Velcro. Sadly, this historic watch was lost on its way to the Smithsonian, and has never been recovered.

In 1978, NASA decided to reassess their choice of watches cleared for space missions and opened bids to other watchmakers. Like it had the first time, the Omega Speedmaster beat out the competition, becoming re-certified as the official watch of the space program.

The Omega Speedmaster was integral during the troubled Apollo 13 mission when astronauts were required to power down the electronic systems on their shuttle. Commander Jim Lovell had to rely on his watch to precisely time re-entry rockets to within a fraction of a second—another coup for the Speedmaster.

Not only trusted by American astronauts, the Russian space program also wears Omega Speedmasters. The historic 1975 docking of the Apollo and Soyuz spacecrafts during the height of the Cold War involved the iconic watch: Omega gifted the Russian cosmonauts with Speedmasters so that they would be on time for their meeting, which they wore during the mission. Fourteen years later, it was discovered that the Russians had been so taken by the watches that they too had adopted them as standard space equipment for all astronauts.

We are pleased to include one of these iconic watches in our Wrist & Pocket Watches auction, online from November 28-December 3. Lot 253 is an Omega Speedmaster Professional circa 1966, in working condition. This watch houses the legendary column-wheel chronograph caliber 321, which was the movement used for the first Speedmasters. In 1969, Omega replaced the 321 with a simple, less expensive caliber 861 in order to meet the surge of demand and compete with the influx of Japanese quartz. Speedmasters with the 321 are the most sought-after, making lot 253 an extra-special find. The 321 is the heir to Omega’s earlier WWII era watches and the truest of Moonwatches, produced in the golden age of space exploration.

We invite you to browse the full catalogue for the Wrist & Pocket Watches auction, and are happy to provide more information, additional images or condition reports as required.

Please contact Donald McLean by email at dpm@waddingtons.ca or by telephone at 416-847-6170

The Lord of the Rings: Sevan Bıçakçı

The Life and Work of Margot Van Voorhies Carr

Finding the Sparkle in 2020

Jewellery by a Celebrated French Medallist

All About Blue Topaz 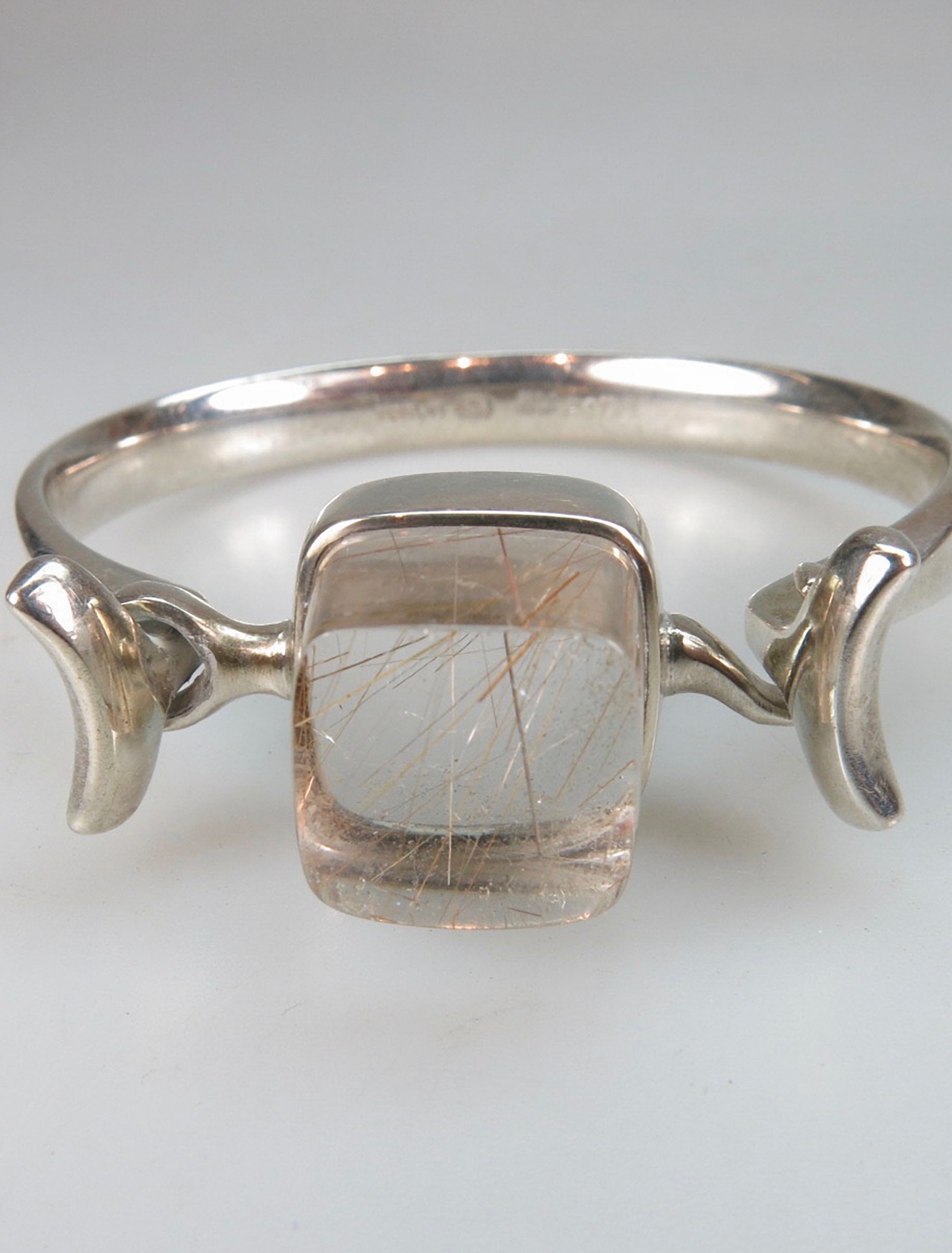 Find Out About Rutilated Quartz in Our Jewellery Auction

Sharing Some Pearls of Wisdom

Donald McLean is the Senior Specialist in the FIne Jewellery and Watch Department. His 35+ years of experience gives him an in-depth knowledge of both domestic and international markets for a wide range of jewellery and horological material. Donald received a Bachelor of Science (Honours) degree in Geology from Carleton University, and earned his F.G.A. with distinction from the Gemmological Association of Great Britain. He is a member of several horological and mineralogical associations, and has appeared as a jewellery and watch specialist on the Canadian Antiques Roadshow.